Advancing the model they set leading up to, during, and following the November, 2020 elections, the RNC continues its Constitutionally-supported legal challenges and robust financial investments in America's pursuit of Election Integrity.  The RNC is focused on FREE, SAFE, LEGAL, TRANSPARENT, and FAIR elections for every voter and is leading the fight to ensure that voter confidence in our election systems returns.  We are currently involved in 19 lawsuits across America to right the wrongs that so many of our fellow Citizens encountered during the entire 2020 Election Cycle.  Every day, more 'evidence' is being uncovered and the RNC is moving litigation forward to challenge wrong-doing, hold those responsible accountable for their actions, and safeguarding our most sacred right...OUR VOTE!

THE ONGOING FIGHT FOR ELECTION INTEGRITY

✓   Participated in over 58 lawsuits in 23 states through the 2020 election, winning a majority of them and spending $30 million on our legal efforts. We are remaining vigilant in our ongoing and important cases pending from the 2020 election, including two in federal appellate courts where the RNC is defending against absentee ballot application harvesting, paid “busing” to the polls, and Democratic challenges to absentee voting safeguards.

✓   Responsible for the only lawsuit in the post-election period where Republicans and President Trump were victorious. We sued the Pennsylvania Secretary of State, challenging her unilateral action to extend an important voter ID deadline set by state law.

✓   Led the litigation effort in the recent monumental Supreme Court victory in Brnovich v. DNC. This ruling allows states to continue to ban the practice of ballot harvesting, a crucial win for election integrity that will have positive ramifications for decades to come.

o  Financed the litigation and coordinated efforts to get the Supreme Court to accept the case.

✓   Won an important early victory in the fight to defend Georgia’s law when the judge in one of the cases denied the plaintiffs’ request to stop the reforms from going into effect for recent runoff elections.

Currently, the RNC is…

✓   Preparing to sue Vermont for recent legislation that violates its state constitution by allowing non-citizens to vote in some local elections.

✓   Policing would-be rogue election boards from making regulations that would water down absentee ballot safeguards and restrict our ability to poll watch. For example, we thwarted the Democrat North Carolina Board of Elections efforts to restrict our ability to relieve poll watchers and have objected to a proposed rulemaking by the California Secretary of State that would loosen regulations for drop boxes.

✓   Ensuring states and localities properly maintain their voter registration lists. We have active investigations in place in Arizona, California, Michigan, Nevada, North Carolina, Ohio, Pennsylvania, Texas, and Virginia. The RNC will sue any state or local election jurisdiction who is not following state and federal law for maintaining their voter rolls.

✓   Building the largest Political Election Integrity Operation in history, which will have staff dedicated to election integrity across the country. As part of the operation, we will recruit, train, and activate volunteers to be at polling locations throughout the voting process. 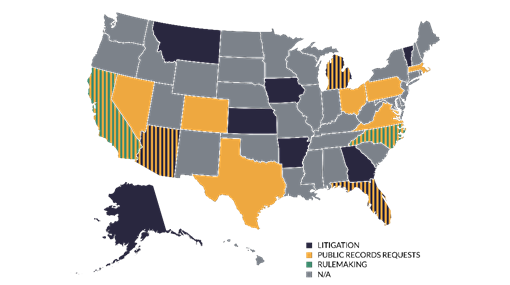 o  The lawsuits are:

✓   Georgia: The RNC has successfully intervened in all eight lawsuits filed against the state challenging its new voting integrity reforms.

o  On July 7, we received an important initial win when the judge in one of the cases denied plaintiffs’ request to stop the reforms from going into effect for upcoming runoff elections.

o  On July 6, the RNC also moved to intervene in the lawsuit the Biden Department of Justice filed against the state. The court granted our intervention request on July 12.

o  The lawsuits are:

o  The lawsuit challenges several provisions in election reforms the state recently enacted, including restrictions on ballot harvesting, setting of uniform polling hours statewide, drop box regulations, and the requirement that absentee ballots be returned by the close of polls on election day in order to count.

o  The RNC led efforts in the recent monumental Supreme Court victory in Brnovich v. DNC, 141 S. Ct. 1263 (2021). We helped finance the litigation, coordinated efforts to get the Supreme Court to accept the case, and led selection process for Supreme Court counsel to represent Arizona GOP.

o  The RNC also intervened in an Arizona Democrat Party challenge to a state law requiring election day “cure” deadline for signature-less ballots in Arizona Democratic Party v. Hobbs, No. 20-16766 (9th Cir. Jan. 20, 2021). We led efforts to get an unfavorable district court ruling “stayed”, thus ensuring law was in effect for the November 2020 election. The case is currently pending with the federal Ninth Circuit Court of Appeals.

o  The RNC is continuing their battle against Democrat SuperPac that sued to strike down state laws banning absentee ballot application harvesting and paid “busing” to the polls. We led efforts to keep laws in effect for the November 2020 election after the Democrat Attorney General gave up. The case is currently under consideration by the federal Sixth Circuit Court of Appeals. Priorities USA v. Nessel, No. 20-1931 (6th Cir. Sept. 24, 2020).

✓   H.R. 1/S. 1: The RNC Counsel’s Office has been working with outside counsel to develop legal theories and draft a lawsuit to challenge provisions of legislation nationalizing federal elections if it were adopted.  These efforts will ensure we are ready to sue quickly in the event Democrats ever pass legislation similar to H.R. 1.

✓   The RNC Counsel’s Office is also engaged in or plans to engage in pending and future litigation in states including but not limited to Alaska, Arkansas, Kansas, Montana, and Vermont.

✓   North Carolina: The RNC and North Carolina GOP successfully thwarted a North Carolina Board of Elections rulemaking that would have restricted our poll watchers and conflicted with state statute. The RNC submitted a detailed letter commenting on the proposed regulation and testified at a May hearing on the rulemaking. The Board of Elections ultimately backed down and enacted a regulation that loosened the proposed restrictions and was consistent with existing state law.

✓   California: Opposing rulemaking in California that would loosen requirements for officials to pick up ballots from mail ballot drop boxes and increase the risk for fraud and mischief. The rulemaking is still pending.

✓   We sent letters to state officials in Arizona, California, Michigan, Nevada, North Carolina, Pennsylvania, and Virginia asking about these practices. We are assisting the Massachusetts GOP with its own request to uncover what it has done with tens of thousands of returned absentee ballot applications.

✓   The RNC will sue any state or local election jurisdiction that is not following state and federal law for maintaining their voter rolls.

✓   The RNC Counsel’s Office is coordinating the efforts of the Committee on Election Integrity that were established by Chairwoman McDaniel and chaired by Florida GOP Chairman Joe Gruters.

✓   The purpose of the Committee is to review what went right and wrong in 2020, consult with experts, and develop a strategic plan for the Republican Party on election integrity moving forward.

✓   RNC Counsel’s Office attorneys have served as legal advisors, drafters and editors of reports, researchers, and subject matter experts in assisting the Committee and its subcommittees in their work. The Committee expects to finalize its report in August.

✓   Political Election Integrity staff will focus on recruiting, training, and placing a massive team of volunteers at every step of the election process.

✓   Grassroots trainings will cover how to effectively exercise their rights when facing a mistake, fraud, or abuse, with an extra emphasis on poll watcher training this cycle.

o  More than 80% of all voters say verifying voter ID is an important security measure; nearly all have driver’s licenses or another form of ID and think it is easy to acquire ID.

o  87% of voters said they were against ballot harvesting and 71% of voters believe ballots should not be accepted after election day.

o  88% of all voters say states should not mail ballots to people who are not registered to vote and non- citizens.

o  77% of all voters reject Democrats’ claim that “racism” is behind voting integrity laws, and believe one party uses it for political purposes, not for electoral progress.

o  78% of all voters said they totally supported a proposed voting plan with these five principles:

5. Cleaning up the Voter Rolls.

Paid for by the Republican National Committee.

Not authorized by any candidate or candidate