STATEMENT FROM THE CHAIRMAN - CHARLOTTESVILLE 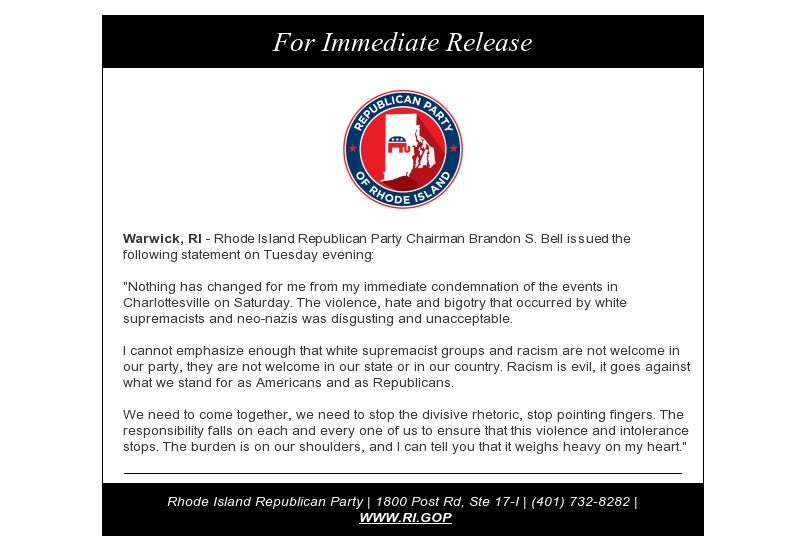 1. Economists have shown that public subsidies for new stadiums make no economic sense

Economists have shown that new stadiums do not generate enough economic growth or tax revenues to justify public subsidies. 1 For example, economists Dennis Coates and Brad Humphreys reviewed more than 40 academic studies that examined public subsidies for professional sports teams over the last two decades. They determined there is "almost no evidence that professional sports franchises and facilities have a measurable economic impact."2 In addition, they emphasized that a “large and growing peer-reviewed economics literature on the economic impacts of stadiums, arenas, sports franchises, and sports mega-events has consistently found no substantial evidence of increased jobs, incomes, or tax revenues for a community.”3 Furthermore, they stated: "Economists reach the nearly unanimous conclusion that ‘tangible’ economic benefits generated by professional sports facilities and franchises are very small; clearly far smaller than stadium advocates suggest and smaller than the size of the subsidies."4 Lastly, they also indicated that in a survey of economists 86 percent agreed that “local and state governments in the United States should eliminate subsidies to professional sports franchises” while only 5 percent disagreed.5 Proponents of a new PawSox stadium have never been able to refute these conclusions by economists or explain why a new PawSox stadium would be different.

2. The analysis produced by consultants like Brailsford & Dunlavey is not reliable

Proponents of building a new PawSox stadium rely upon an analysis performed by Brailsford & Dunlavey, a consulting firm hired by the City of Pawtucket that previously performed a study for the PawSox related to the proposed Providence stadium. 6 They claim that a new PawSox Pawtucket stadium will generate directly and indirectly millions in economic growth and tax revenues. However, the analysis by Brailsford & Dunlavey appears comparable to the flawed economic impact studies typically used by promotors for tax subsidies of new stadiums. Economists have noted that cities use “bogus economic impact studies” to support their claim “that stadiums are good investments.”7 One economist has stated that these studies and analyses 1 See C. Eugene Emery Jr., “Politifact Rhode Island: R.I.GOP official Steven Frias says research finds no economic benefit from having sports franchise”, Providence Journal, (3/7/2015) 2 Dennis Coates and Brad R. Humphreys, “Do Economists Reach a Conclusion on Subsidies for Sports Franchises, Stadiums, and Mega-Events?”, Econ Journal Watch, Volume 5, Number 3, at 302 (September 2008) 3 Id. at 310. 4 Id. at 311. 5 Id. at 296. 6 Brailsford & Dunlavey, Economic & Fiscal Benefits Analysis of a New Downtown Pawtucket Ballpark, (April 2017); Brailsford & Dunlavey, Project Hope, (April 2015). This firm also did an economic study for the new ballpark built in Hartford, Connecticut. Brailsford & Dunlavey, New Ballpark Planning Study, (2/18/2014). 7 Roger G. Noll and Andrew Zimbalist, “The Economic Impact of Sports Teams and Facilities”, Roger G. Noll and Andrew Zimbalist, editors, Sports, Jobs & Taxes, at 84 (1997). are never published in reputable journals because "you can make them say whatever you want them to say" by tinkering with the assumptions. 8 Another economist noted that “these studies are neither impartial nor objective” and “incorporate assumptions and adopt methods that facilitate their use as advocacy documents intended to provide a public subsidy for a sports project with a convincing aura of economic legitimacy.”9 Other economists have called these studies simply “promotional literature”, which suffer from “a long list” of problems that are “well-documented” by many economists. 10 One problem noted by economists is that much of the economic activity quantified in these studies is merely “redistributive”, in particular when a new stadium is being built in the same city.11 Much of the consumer spending increase due to a new stadium comes from the entertainment budgets of local residents, and leads to decreases in spending in other recreational and entertainment activities. 12 Also, these studies have “several errors” that stem from the “misapplication or misinterpretation of the ‘multiplier’ effect, which is the principal economic theory embraced by economic impact studies.”13 Some economists have noted that the method for “assessing economic impact overstates the extent to which a team generates a net increase in business” and “overstates again multiplier effects arising from this business.”14 These type of studies “overstate the extent to which the income generated by a team remains in the local economy” because most of the gross revenues generated by a team goes to owners, executives, managers, coaches, scouts and players.15 Some economists have suggested that the “proper multiplier for sports teams is 1.2” and this multiplier should “not” be “applied to gross spending, but to that portion of spending that constitutes a net increase in the income of local residents”.16 The PawSox have never explained why the Brailsford & Dunlavey analysis is more reliable than comparable economic comparable studies shown by economists to be unreliable.

MATTIELLO AND MONTANARO MISLEADING THE TAXPAYERS 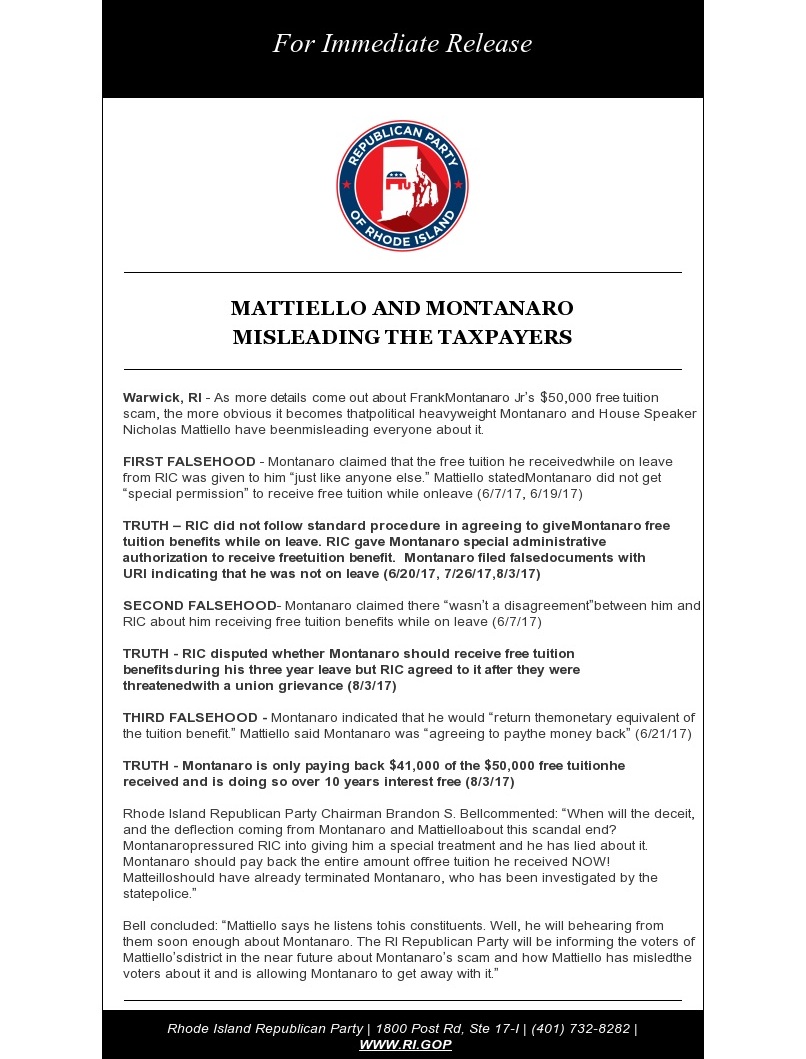 SENATORS: VOTE NO OR BOYCOTT THE BUDGET 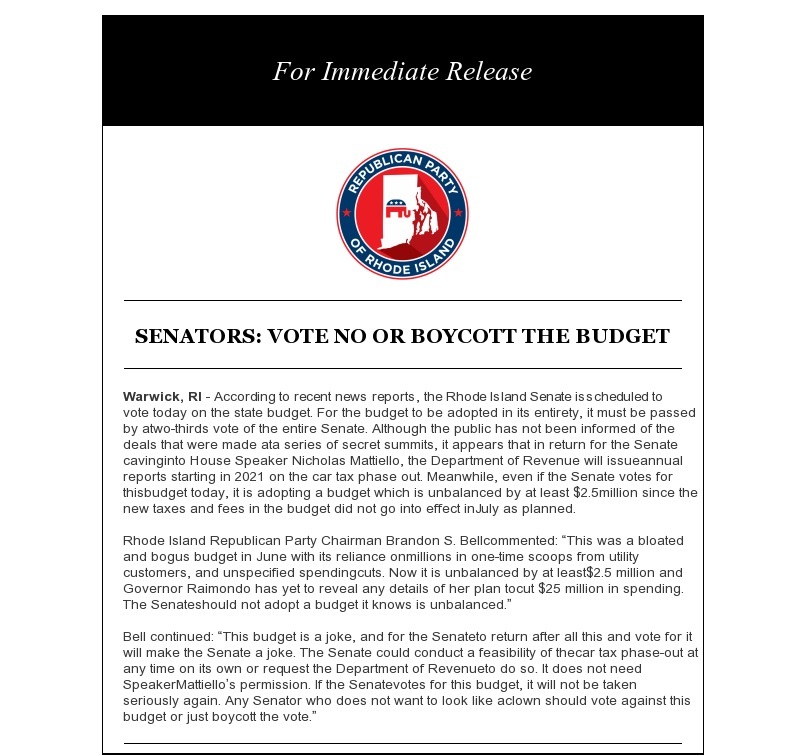 GOVERNOR RAIMONDO WILL DO ANYTHING FOR MONEY 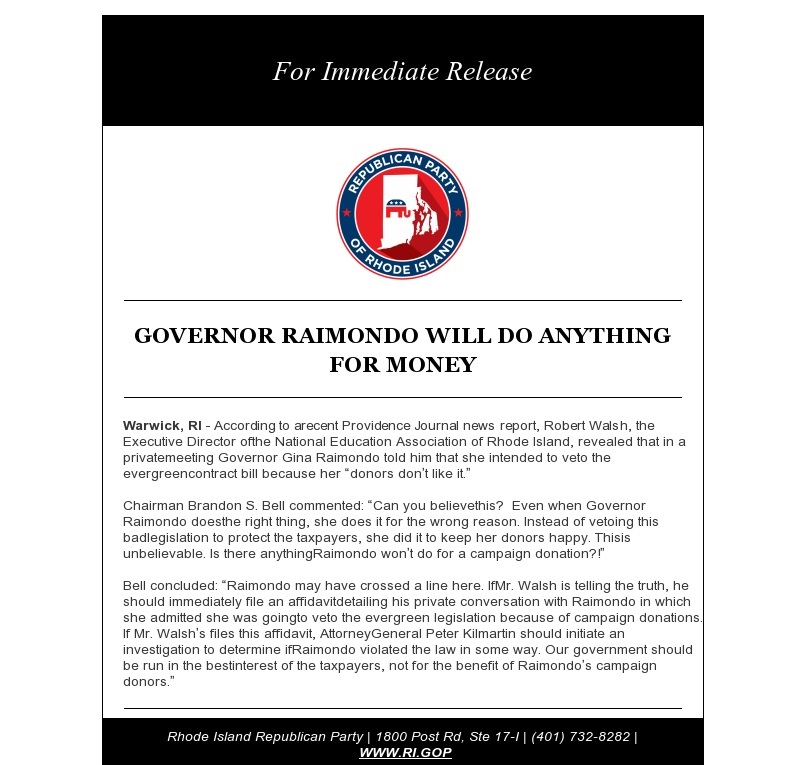 RI RANKS NEAR THE BOTTOM JUST LIKE YOU GOVERNOR RAIMONDO 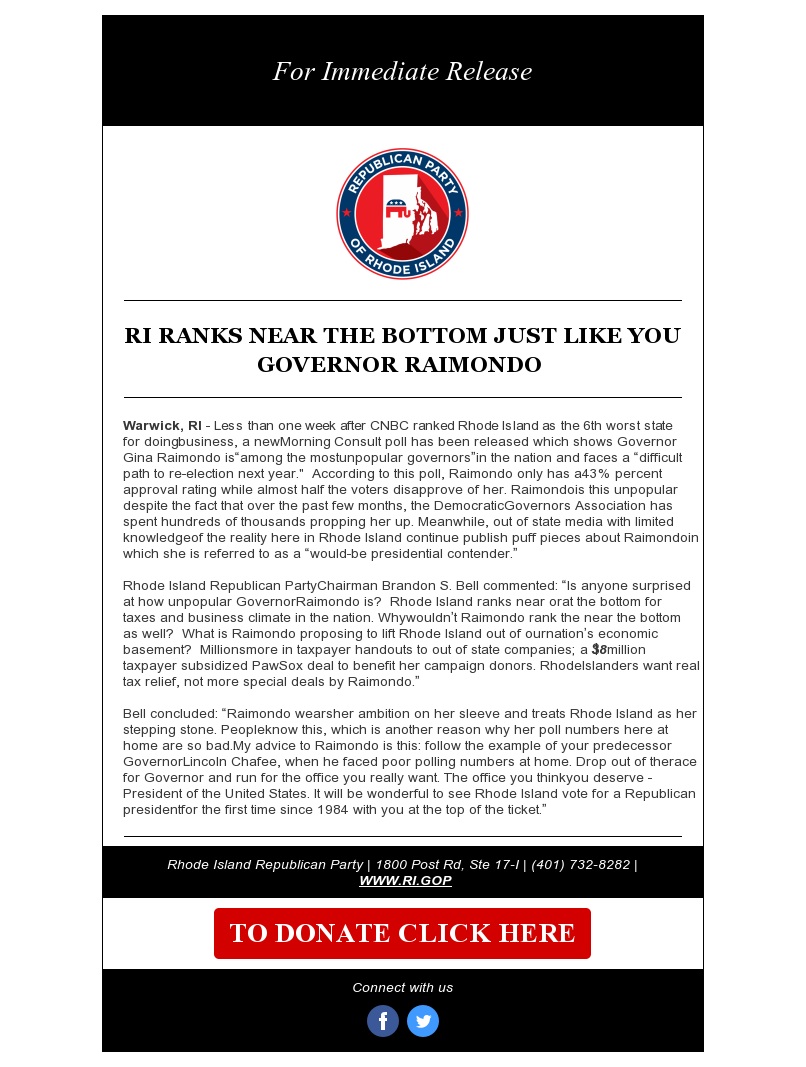 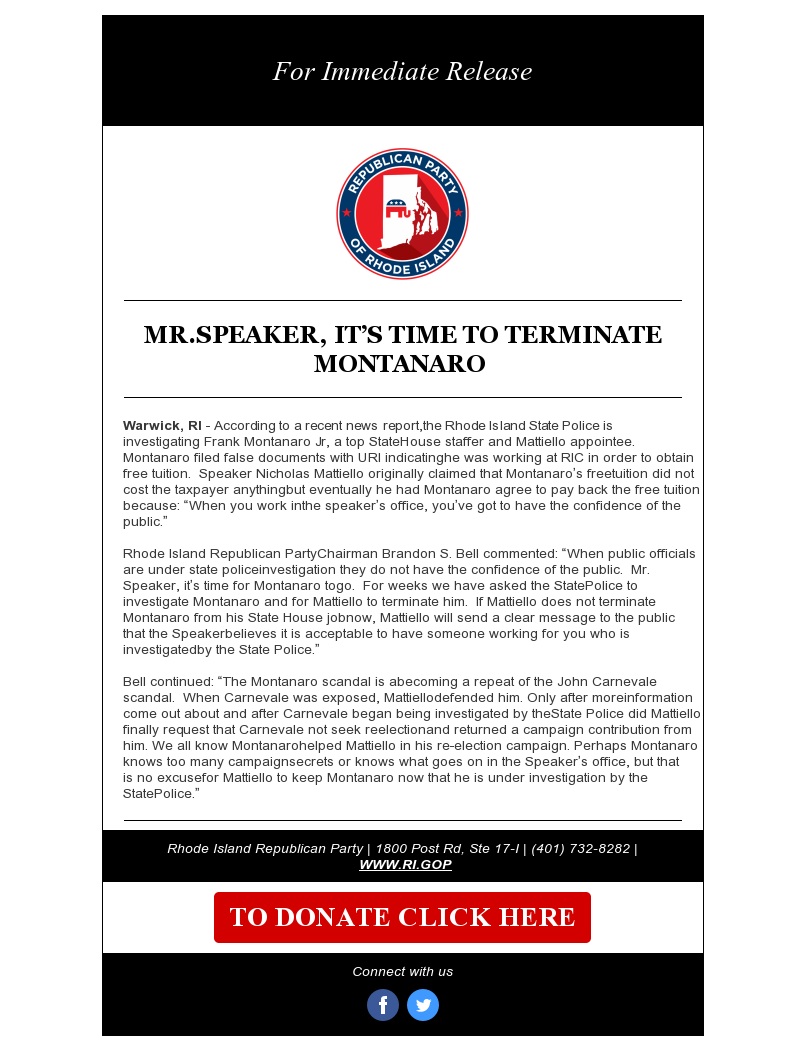 THE SECRET SUMMIT TO SHAKEDOWN THE TAXPAYERS 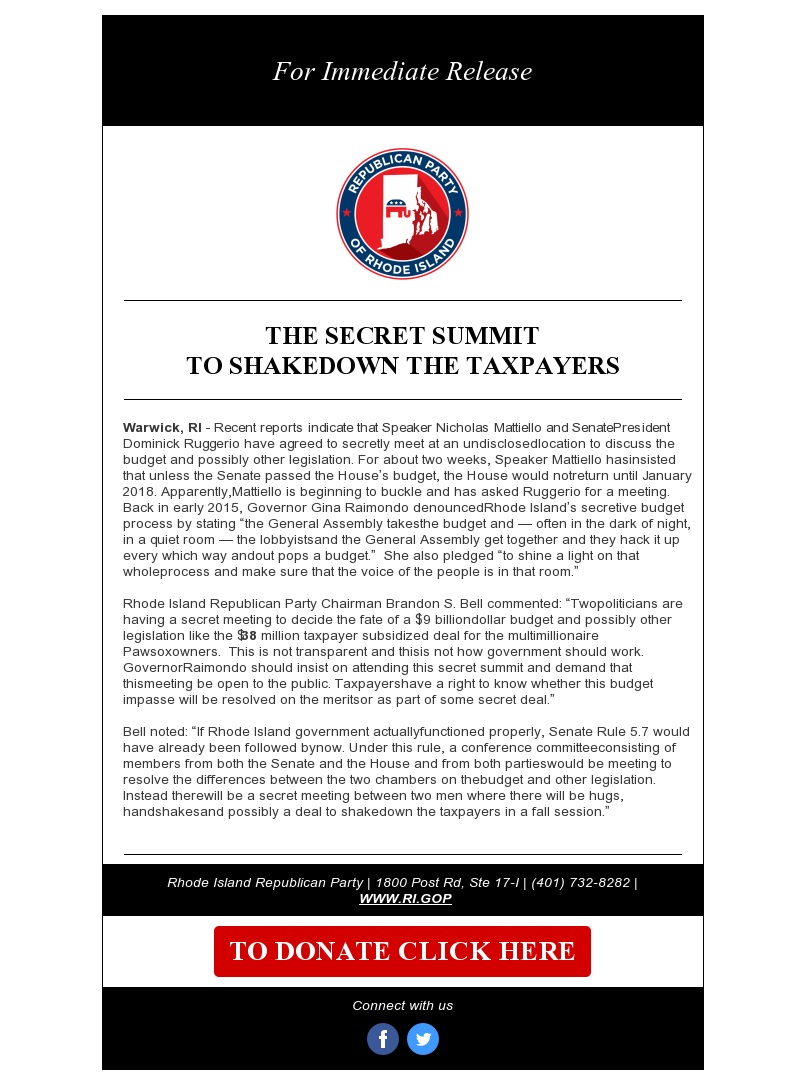 RI "STILL SOMETHING OF A MESS” BECAUSE OF GOVERNOR RAIMONDO 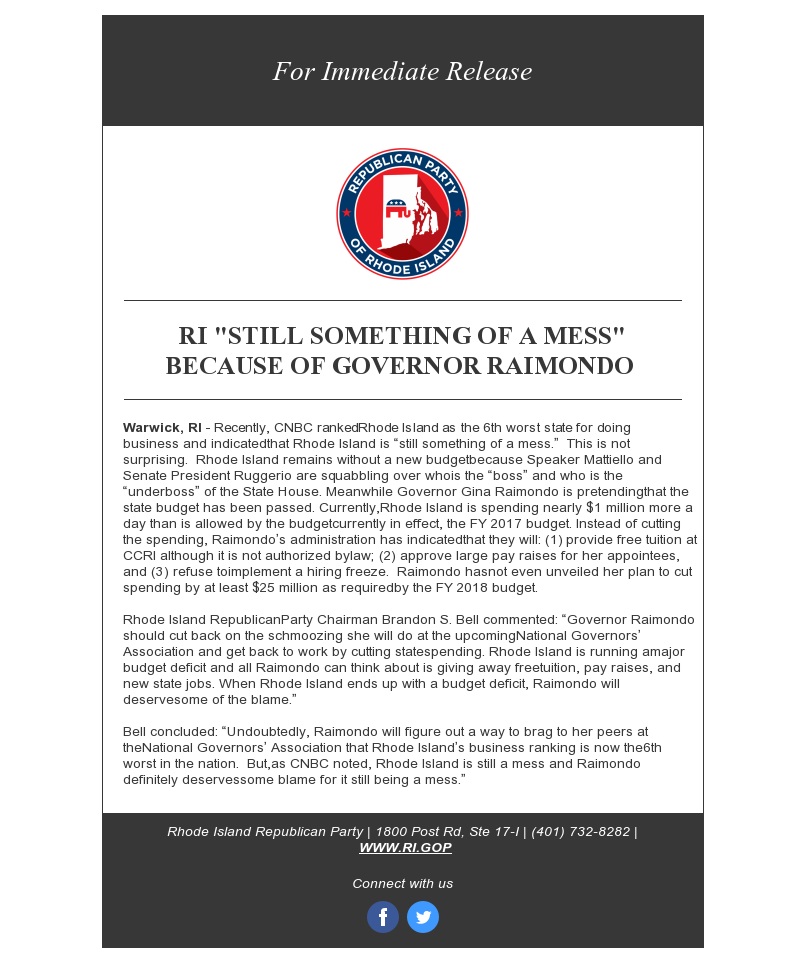 RAIMONDO DO YOUR JOB AND VETO THE EVERGREEN CONTRACT BILL 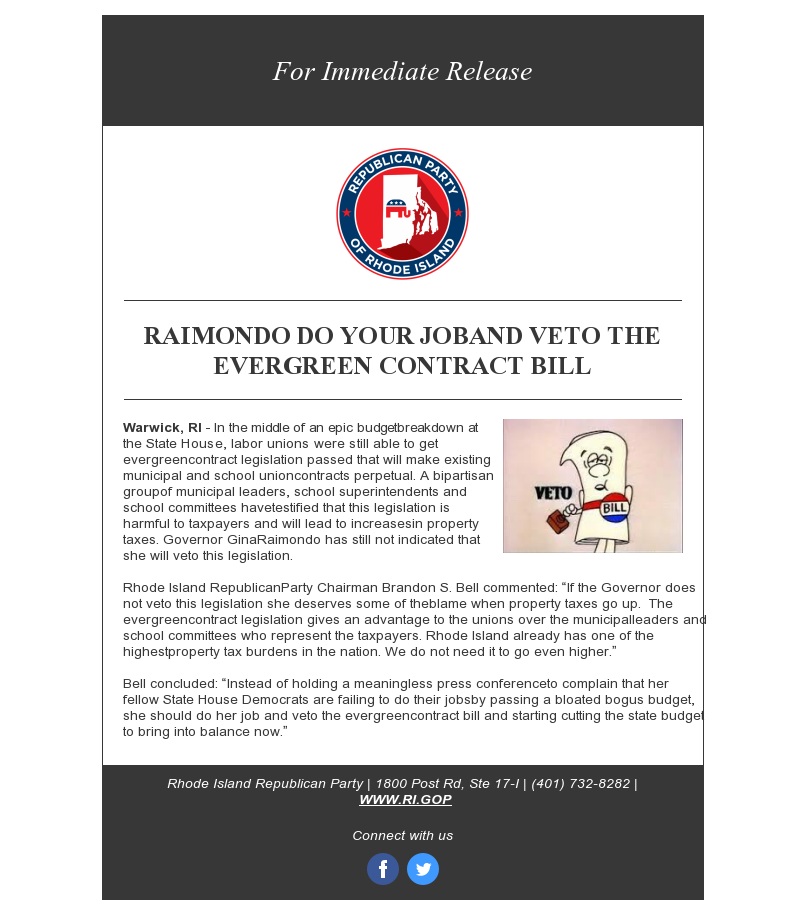